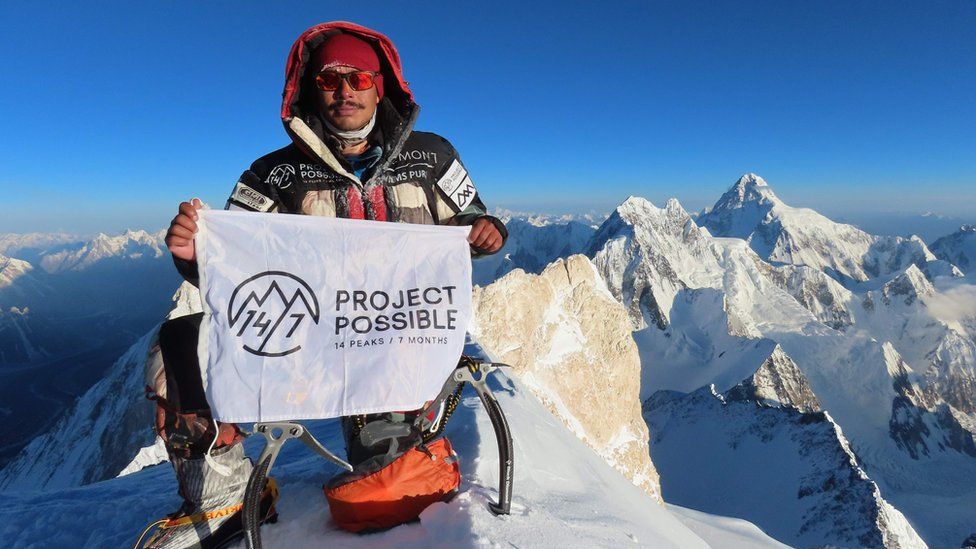 The much-talked Netflix documentary, “14 Peaks: Nothing is Impossible,” trending globally is a marvelous art of storytelling of a headstrong guy, Nirmal Purja, determined to turn his crazy idea into a reality, where his idea was to summit all 8000-above mountains in 7 months, that no one had done before. It is indeed a heroic act but to me, there is something much bigger and louder that left me in awe, that as soon as I completed the documentary, he secured a special place in my heart and mind as someone from Nepal I truly admire, respect and look up to; someone I don’t mind to say, “I am fanboy of.” Because he is everything I ever wanted to be, I ever wanted to do. No, it’s not about climbing mountains. There is something more. This article is all about what I saw while watching the documentary that left me in awe.

Somewhere in late 2019, a news was making a round on social media about a guy named Nirmal Purja, who conquered all 14 8000-meter-above mountains breaking many previous records. Being Nepalese, mountaineering-related records are not really new to us. So for me, honestly speaking, it was just another news that I was happy about but nothing as such awed. Here and there, I could see Nirmal Purja on my newsfeed with someone I know on social media, and I used to be like “okay.” I actually had not followed him on Insta or FB until recently, so I had no idea everything that he was up to. Nepal is indeed a diverse society and mountaineering community is something I have not been that closely associated with, so it’s obvious for me to not know much about that side of Nepal. I regret though because only after the documentary, I realized what all I had been missing.

Then the Netflix teaser was out. I thought it is just one of those Everest Expedition kinda Nat Geo documentaries. “Cool! Nepal is going to be in Netflix.” All I could feel. Then came the documentary. All of sudden, my newsfeed started flooding with words of appreciation and applauds for Nirmal Purja and the team. I had to watch to see what’s in there that everyone is talking about. How would I know the documentary was made to rejuvenate me and many millions of dreamers out there!

It has a brilliant cinematography, right energy, perfect storytelling and perfect blending of human emotions, nature and human characters. No doubt about that. But actual mind-blowing part is something only dreamers can see and relate. That’s what I meant above when I said, Nirmal Purja is someone many dreamers wanted to be but could not, especially dreamers from Nepal. What I meant by that is, in theory, every dreamers know if you have a dream, dive in to it, but before diving into it, do the homework, get the fund, build right team, and dive in. Many dreamers from Nepal fail or give up somewhere between dreaming and diving in. The documentary is the visual proofs that should now work as template for many Nepalese entrepreneurs and aspirants with big dreams and desires who otherwise have been doubting. Let me walk you through Nirmal Purja’s shoes to show you the mind-blowing part of the “14 Peaks: Nothing is Impossible.” It’s not about 14 peaks he climbed but the mountains of life he climbed before the 14 peaks. That’s where the actual inspiration lies in.

Imagine yourself of being in a well-paying job with a beautiful and loving wife, living in one of the best countries. Now, start walking in his shoes. Back home, in one of the poorest countries, you have a frail mom who is world to you – country with its plights of problems and issues, chaos and conflicts, and there lies mountains that you are crazy about. You have two worlds, one which guarantees you every comfort and security and another where lies your passion and dreams – a dream to get into a project where he would climb all 14 mountains just in 7 months that he would name “Project Possible.” Such dilemma is thrown to every dreamers by life. Nirmal Purja chose to leave the comfort zone. He chose to leave his well-paying job despite knowing the consequences and how his decision would affect his family back in Nepal. Imagine the level of courage and determination one needs to make such tough choice. That’s the first mountain I saw him summitting, that many dreamers can’t.

Keep walking in his shoes.

You made your decision but you know dreaming is not enough. You have to be realistic and practical enough. For everything you want to do, you need money. And crazy idea needs crazy resource. Gathering good enough fund was the second mountain for Nirmal Purja. He went everywhere possible, met everyone possible for the funding. As you could see, there was an arm band of Haama Steel in one of the scenes, which means he had successfully convinced the brand even to sponsor his idea. For sure, there are many supporting partners. Anyone in marketing business can say, how hard it is to get sponsors in Nepal. Even if they agree to, they want their ugly LOGO right on your nose for everything you do. He miraculously managed well. Despite, funding was not enough and he re-mortgaged his own residential house. Think this way, you have this crazy idea, where you could just die. How many people would put their own property in bank to take loan to sponsor own deathtrap? He did.

Keep walking in his shoes.

Okay, now you have the money, but money is not enough. You need a right team, the team of musketeers. In a country, where everyone says yeha team banaunai garro, milera kaam garnai gaaro (hard to form a team in Nepal because of trust and other issues), Nirmal Purja just proved them wrong. With his right leadership, charm, incentives, and above all honesty and integrity, he built the team who would die for him. As you could see in one of the scenes, where he says “stop calling them just Sherpa. They have a name.” That speaks the volume of his integrity, the philosophy, the principles and values he live by.

Here you are! you have your goal set, got the fund, got the team, got the logo, got the spirit, and you are all set to execute, but you have one more plan to add to your goal and that is.

FILM YOUR ENTIRE DEATHTRAP JOURNEY! Nirmal Purja along with his team captured more than 100 hours of footage, which were then ‘brought to life’ over the next 18 months by director Torquil Jones.

Wait! Let’s go fast backwarding. Damn! this guy had all plan set to climb the mountains, document them, and release them through Netflix. The Project 14/7 was never only about climbing mountains but make visual story out of the project, and show the world and educate them about mountaineering and people involved in, that many otherwise know nothing about.

This is where the immense respects come for the Nimsdai, aka Nirmal Purja. Back in 2018-19, he came up with an idea of climbing mountains, filming the journey, and showcase to world that would promote Nepal’s tourism, educate about actual reality of mountaineering profession and people involved. We all can have such dreams. Some dream to be musician, some dream to be entrepreneur, some dream to be something and all, and inspire the rest, but how many of we could dream to take a route that would kill us? How many of us could raise fund for such project where if the main person dies, everything will die with him?

After watching 14 Peaks, I am not any more the me I used to be. Thank you Nimsdai for making me believe the theory that I knew – dream, plan, fund, execute, document – through books only. When rest of us were complaining about life and career, politics and government, in the same timeline, somewhere quietly you kickstarted your project proving NOTHING IS IMPOSSIBLE. Your poster should be in every children’s book, in every hoarding board, and in every street polls, and in every corner of the country.