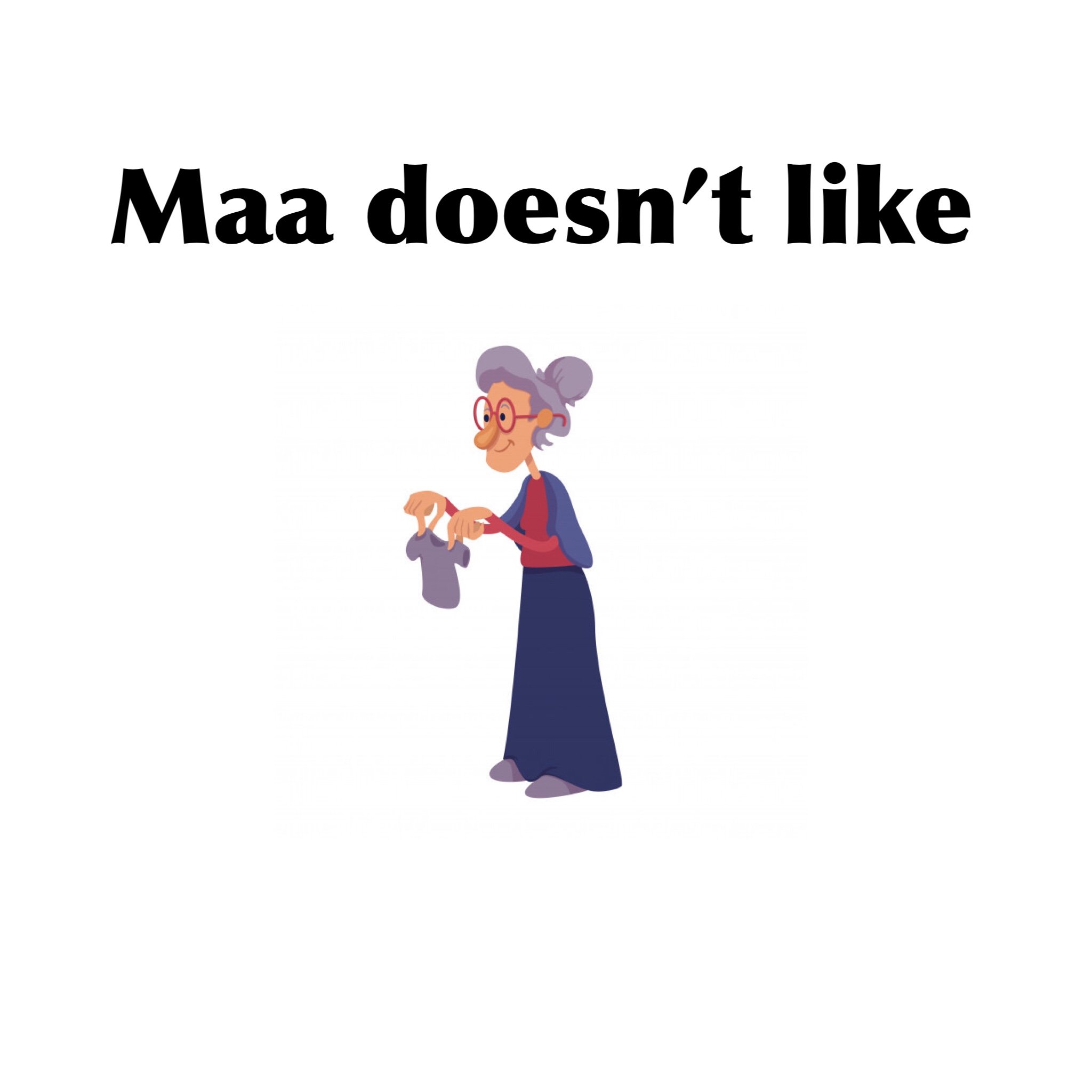 Maa, be in a form of mother or grandmother, are often known for:

Like how US has “average joe,” Nepal has Ram Bahadur. It’s not a person, it’s a class. 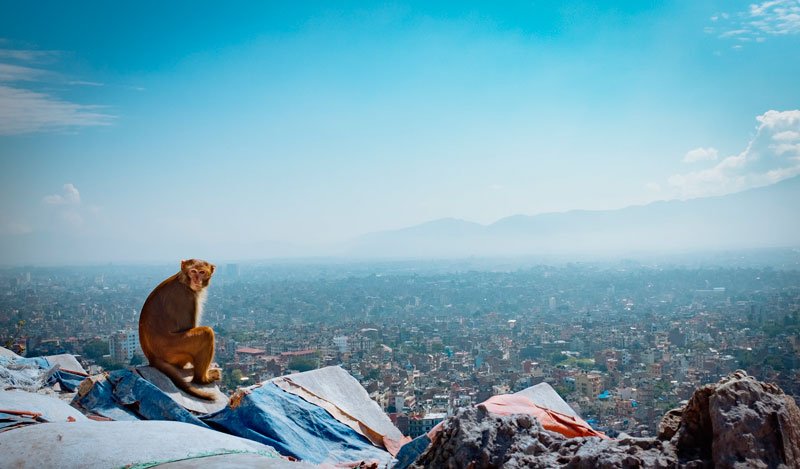 Ram Bahadur has many avatars. You may find him working for a bank, or in the civil service as a salaried person; or owns a momo shop or a business with decent enough income to live a financially stable life in Nepal; has a house to live and needed social support, has access to all the basic utilities. He is a religious man high on nationalism – loves festivals, loves his religion; loves his language; loves his country. Some of the Ram Bahadur may seem jobless or without any business, but still, they have good enough inheritance to live a life comfortably. Overall, Ram Bahadur is a secured privilege Nepalese. Most of these Ram Bahadur live in cities. Some of them can be found in semi-rural areas.

He has no interest to leave this country in search of a job or better life abroad. He is happy here. Why will he even want to leave? He does not have to. He can plan a weekend party at home, he can make a short trip to Pokhara whenever he feels like, he can take his family to a resort once in a while, he can go out for dinner or lunch; can spend all day in a tea shop or over coffee; buy clothes, afford bike or vehicle. He can basically stand loud and proud among his peers and relatives for the way he is and things he does. Thus, he has no reason to go anywhere else when he already has his identity and base in this country.

His life is simple. It revolves around his work, his friends, his family, and his relatives. Maintaining them and finding fun in between pretty much sums up his life. He is not here to make a rocket, nor is here to build an empire. His career plan is also plain and simple – work till 60, take no shi%. He has no desperation to climb the career ladder. He leaves that up to time and fate. The jobless Ram Bahadur too has a simple life plan – manage till you can and when you can’t, sell a piece of property.

Ram Bahadur loves using social media – Facebook, Tweeter, Tiktok. He is super proud of Nepali music and movies. Loves giving his opinion on different sociopolitical topics. His opinions are based on people he follows and youtube videos he watches or FB videos that go viral. He is a nationalist. He does not like Indians much nor likes the US government. He is a self-recruited knight to protect his religion, culture, and tradition. He strongly believes that white people from the west are all up for spreading Christianity. And, India is all up for annexing his country. He is politically inclined to some or other party, and other than his party leaders, he thinks everyone else is corrupted and is an agent of a foreign power. He also believes in protectionism. He thinks the only way to grow a country economically is by promoting local products and thus if possible should ban or tax heavily any foreign product. But he does not understand how the economy works. Since he is making money to afford a life and sponsor his dependents, to him the economy is just doing fine and nothing much needs to be done.

Basically, he sees and understands the country and people from his own level of thinking and the bubble he belongs to. To him, everyone is rich in this country. To him, it’s not that tough to make a living wage in this country. He looks at the share market and generalizes the whole of Nepal stating “look! everyone has money in this country.” He has a simple formula to develop this country. “Since everyone has money, Nepal can have enough money to develop but corruption is the problem.” He does not know how much tax revenues get collected and where that money actually goes. He does not understand any complex system and process that the modern world runs by, but he does not like to admit that. He thinks he knows. You can find him often giving his opinion and prescription on national and international issues and topics; can find him sharing his opinion on social media and cafeteria or while with friends on what Nepal should do, what India or US is doing, etc.

In Maslow’s hierarchy of needs, Ram Bahadur’s needs fall somewhere in between love and belongingness and esteem needs. Since he has passed across the safety needs, his way of looking at the world is in terms of looking for acceptance and love, a sense of belongingness; desires for respect and reputations. He is so fixated in the zone, that he can’t think of anything beyond his privilege bubble. From his terrace, when he sees a city full of houses, he tends to think everyone is a house owner in this country but fails to see that in all those houses there are people living in rents whose life is not as easy as of him. While riding his bike or driving his vehicle, he fails to see hundreds of people waiting for the public buses. He does not know what number of people are deprived of quality education and health because, in his world, that’s not the case. When he posts a status stating the border should be closed, he has no idea what number of people are actually surviving because of the open border. He does not know where Nepal stands in GDP, in HDI, doing business index, nor he is bothered about. From his glass, everyone is doing just fine.

Ram Bahadur is a lucky man who should not be allowed to decide what is best for unlucky Nepalese unless has a needed empathy and wisdom to see from others eyes, listen from others ears, and feel from others heart.

This post is for amusement purpose and can be highly offensive to some, so read at your own risk.  The views expressed aren’t that of Kaagmandu Magazine.

When someone in Nepal says “I am an entrepreneur,” understand this.  He is a college drop-out dude struggling for stability and identity with no parental support, desperately looking for a sugar-coated word to describe self so that could feel good about self despite being a loser.   Think like this.  You don’t have certificate, you can’t get visa except for gulf, you can’t get a job where you could see yourself becoming a manager, and your parents don’t trust you anymore for wasting their money on education but then, you gotta live.   Do what? Become an entrepreneur.  Wow! what an arse-saving title to glorify a pity butt.  See, basically what they do is get things from wholesalers and sell it to lazy people on Internet.  Or, be a middle man.  Which basically is same as being Sahuji or dalal.  But, they have a name for it – CEO.

“we are a service provided to connect bla bla bla”

Man, these guys are funny.  And poor too.  Seriously!  You know what they order every time when they to go to a cafe? Black coffee.  Dude, I understand you can’t afford a cappuccino but black tea is much cheaper.  Try that out.  You can save some more money.

How many of you like to be called “FAKE?” No one with right mind likes to be called that, except Nepalese entrepreneurs.  I mean seriously they are proud to fake.  You know what’s their mantra is? “Fake it until you make it.”  WTF!!  A BIG TIME faker.

I once was with these bunch of entrepreneurs and they bored me to death.  Those guys were talking about Elon Musk, and arguing on whether he would fail or succeed.  HOLY F@ck !  I don’t even understand the language they use.  Penetration, proposition, bla bla sh!t.  The only penetration I know is ….leave it.  You know what I mean.  Man, these guys are total weird.

Anyway, I respect these guys.  These guys are up to changing Nepal.  I don’t know how the f@ck these guys gonna do that with their sh!tty website and apps, but still they think they can.  And I respect them for that confidence.  And I must.  See, they are drop out, they are fake, they talk about world, they like to change Nepal, and their favorite junction is tea shop (cafe).  How could I disrespect prospective ministers from tomorrow? I should not.