Much-awaited web series starring Priyanka Karki and Shristi Shrestha is out now.  The web series had already trickled curiosity among Netizens through its brilliant cinematography and teaser-like music video, Pahaar by Sajan Raj Vaidhya, and many had assumed that this must be worth-a-wait web series.  Watching it, must say, expectation is met.

When Nepalese film artists and film makers are being criticized for being too dramatic and too lame on story line, “Just Another Love Story” has come to force think every critics to reconsider their broad generalization.   Though, it’s a web series and only first episode is released, but looking at this one piece of puzzle itself, one can confidently say the story line is definitely brilliant.

And the acting? Don’t even ask.  It is just fabulous.  Both the actors, Priyanka and Shristi, have acted so brilliantly that it does not even feel like an acting and actually looks more like as if someone secretly filmed them.  It’s so natural and just so real.  These duos have set new benchmark for all.

However, there needs some improvement on lighting and sound and also subtitle could be made bit easy to read.  Just a technical thing.  Hope that will be taken care in coming episodes.

The 13-minute long first episode of the web series that starts from a club scene and ends up in a bed scene with apparent desire and lust between two besties is a very promising web series worth a wait for remaining episodes and see how things would unfold justifying it’s title and the buzz and applause it earned for everything.

All in all, it’s a bold acting, bold concept, and bold decision from the team involved, to come up with web series on homosexuality in a society where heterosexual love story itself struggles to fit in.

Introspection of Human Mind- Vol. I

A short film from India …dramatic like Bollywood but still worth a watch. 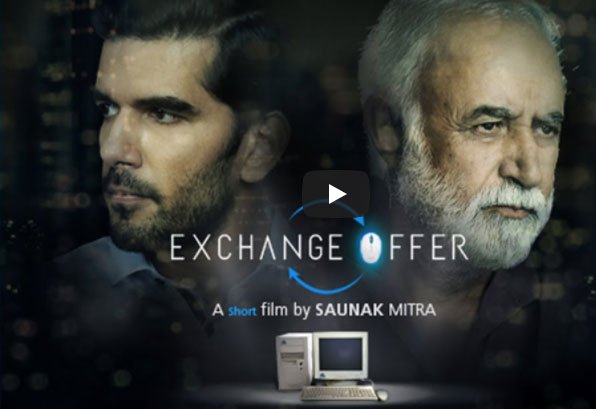 Written and directed by Saunak Mitra, “Exchange Offer” is a Hindi short film that portrays generation gap and loneliness in old age beautifully. It’s synopsis reads “Shiv Kumar Pant – a retired school principal of St. Stephan’s, Delhi, lives with his caretaker, Bisveswar as his son, Rishabh, lives in California with his wife and a one-year-old son. Leading a mundane life, Mr. Pant has found solace in poetry writing, typing on his old computer. One day, the computer suddenly goes off. He asks Rishabh to make a complaint to the manufacturing company to send a service engineer to repair the computer. The rendezvous with the service engineer at his door brings to him an incredible Exchange Offer and a bouquet of nostalgia and surprises.”

This movie is a great, layered story on the complexities of relationships with the passage of time, the haunting aspect of getting old alone, the technological gap and the desire and the necessity of change. The story builds up slowly and takes you in an emotional roller coaster but at the end will leave you feeling satisfied from within. This movie features M. K. Raina, Taher Shabbir and Surendra Rajan in the lead roles.

Without any spoilers, this is what we can say! Go ahead and give this a watch! And do let us know how you feel afterwards with your reviews in the comments section!

A song not meant for everyone

The song Magadh, tShunya, is one of the kind. It does not fit in any genre because its uniqueness itself is a genre. According to the video description, the song is on a historical fact about a king….

Leave it, not going to reveal here. Watch it, read the lyrics and find out yourself.

About Video, according to the team:
“Generated using combination of Deep Learning and Digital Signal Processing. The background video is completely generated. No manual process is required, however, lyrics, logo, and mirror were added on post. Image generation was trained using custom trained StyleGAN with a dataset consisting of war paintings.”

After a long time, found a rap from Nepal that could give us goosebumps and awe feeling.

What a beat, what a strike. Wish video was much better; seems a budget video.

Song like “Lollypop Lagelu” had set a different kind of stereotype about songs from madhesh and their music. No more. After listening till the end, you too will go like “Never thought Bhojpuri Rap could be this lit.” Well, it is not really Bhojpuri, but mix of.